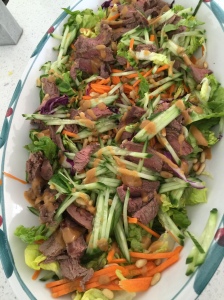 We are on the long summertime school holidays and after a walk on the beach, an easy salad is called for. Used the Peanut Soba noodle sauce recipe from new Festive Flavour cookbook.   ( halve sauce quantity next time )A similar recipe is posted above.  Grilled rump steak, sliced finely , tossed into salad topped with toasted  pinenuts. Used thermomix to coleslaw up some cabbage, tossed in cucumber and carrots. The dressing made in seconds in with Thermomix  (chopped garlic and ginger first 3 sec, speed 7 , then added the other dressing ingredients and mixed at speed 7 until combined) Miss 9 doesn’t like dressing so we left in a jar to be added separately. Makes enough dressing for two or three meals,  yum.