Wanted to try another popular soup recipe.  Note for next time: chop all vegetables first speed 5 until desired size and set aside before cooking onion and garlic. Chop finer for kids. What they can’t see gets eaten.   Great soup, no pasta added and used TM chicken stock paste.

Instead of parboiling the potatoes in a pot, this method from the recipe community steams the potatoes using the varoma  and then you rough them up the same conventional way by shaking them in the varoma dish to create the ideal surface to crisp  up in the oven. Works very well, potatoes tossed with rosemary, sea salt and olive oil before roasting.  Will definately be our go to method for parboiling potatoes.

This recipe from the community doesn’t pass the waistline test, it’s not ” lite ” with the sugar but you can reduce the sugar and it’s pretty close to the KFC taste.  Miss 8 liked it, Miss 14 was “take it or leave it”. Will go with the KFC chicken recipe from Road to loving my Thermomix’s blog. That recipe we’ve countless times …baked / fried.. legs / wings / thighs / whole chicken cut into pieces, our favourite non takeout takeaway meal!

The only time consuming part about making pumpkin soup is peeling the pumpkin but today for the first time cutting pumpkin was a breeze. Got a new handy tool just for dicing pumpkin. The seesaw blade was great, ploughed through that pumpkin like it was butter. Used this recipe from the community because it had the highest rating with 66 positive comments and it used 800g of cut pumpkin instead of only 500g in the thermomix guided recipe. Also had some potato and carrot added and a pinch of curry powder and garlic. Almost like our family favourite recipe except we also add an apple  which brings a lovely sweet depth to the soup. Dad and Miss 8 preferred the new recipe whilst Mum and Miss 14 preferred the apple added.  With either recipe the soup is done in 25 minutes, and blitzed into the smoothest, silkiest soup. Enough for lunch and to freeze for after school  snacks during the week.

No one can quite believe these vegetables are not stir fried. It’s a must try thermomix super simple guided recipe if you like vegetables and possibly our most used guided recipe.  We use between 500g to 1kg of fresh vegetables depending on what’s in the fridge and what’s cooking for dinner.  It doesn’t get boring because you can change the mix of vegetables every night ( recipe states 500g but we often increase  to 1kg of vegetables), as long as there are some the kids will eat everyone is happy.  If increasing to 1kg increase cook time a couple more minutes, 9 minutes. And it’s perfect for using up the end of week vegetables left in the fridge.  Leave out the chillies if preferred and follow from the garlic and ginger step. Perfect crunchy tasty vegetables ready in 7 minutes, no stirring, no standing at the stove. Woohoo!  Add some grilled/steamed chicken, beef or fish and dinner is done. 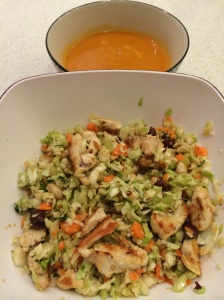 If you have time and a mandolin, the vegetables for this slaw can be finely  shredded, but when you have very little time, slaw chopped with the thermomix can be ready in seconds. Put in the roughly cut vegetables and herbs and blend 5 seconds, speed 4, then add 2-3 seconds at speed 4 until your preferred texture is reached. Sometimes I will add the splashes of the dressing ingredients to the vegetables in the thermomix before I chop, other times make the dressing and toss into the coleslaw.  Added some grilled chicken and nuts for protein to the slaw.

Tomato soup using thermomix guided recipe is the side dish. Dinner done with very little effort. And great to see kids eating all the vegetables. And leftovers the next day taste even better with more time for the flavours to absorb.

Oakhill Potatoes ( potato casserole)  is the family’s  most requested comfort food and we all love it. A golden oldie, it’s an Alison Holst recipe which was taught in cooking class at intermediate school and been made ever since. Only usually made for BBQ’s or parties because it was so time consuming but not now with the thermomix.   Converted for the thermomix it’s now very simple,  steam potatoes and eggs using thermomix, cut and sauté onions and bacon using thermomix, make white sauce with guided bechemal recipe in the thermomix. Assemble the three elements and bake. No need to stand by stove boiling eggs and potatoes or frying the onion and bacon. White sauce ( bechemal sauce ) is a made  in 11 minutes by the thernomix, cheese grated with thermomix, slices of bread blitzed with thermomix to make crumb.

Can refrigerate for up to 24 hours or bake immediately. To my daughters, you might want to double the recipe and make two because one is usually wolfed down so quickly!!

Thermomix guided creamy tomato soup is perfect for kids afternoon tea. Requires 700g of fresh tomatoes, garlic, onion, tomato paste, vegetable stock and fresh herbs. Used milk instead of cream and sweetened  a little more at the end because the tomatoes weren’t very ripe. Cooked in 12 minutes. Served with grissini dipping sticks. The kids love these sticks ! Made grissini from the pizza dough recipe flavoured with chopped garlic and rosemary,  brushed with olive oil and sea salt before baking for 10 minutes at 200c. The other half of the dough was rolled less thinly and snap frozen for lunch boxes.

Our favourite sweetcorn fritter recipe. Easy Sunday lunch, with rocket salad. Kids love Pete Evans green goddess dressing and eating lots more salad and taken a liking to the peppery taste of rocket which we have growing in abundance in the garden. Pre Thermomix days, nothing edible would grow in the garden usually from lack of watering and feeding. But it’s amazing how our focus on healthy eating has somehow transformed a bare herb garden into something that adds regularly to our meals. More than ever before determined to keep replanting herbs and loving the fact we can go pick some greens straight from the garden for our salads.

What takes this ordinary fritter into something with a bit more kick is this artisan  pickle which we bought from fabulous  Farros. At $20 a jar definately a treat, but it’s  homemade and an award winning prawn balcháo. The Kashmin chilli and curry leaves  provide a bit of heat and warmth to our lunch.